Her Story in Jewels: Marie Antoinette

Who Was Marie Antoinette?

Marie Antoinette (1755-1793) is one of history's most iconic and controversial queens. Her nickname was Madame Déficit, her hair was three feet high, and she lived in luxury, spending huge amounts on food, clothes, gambling, and jewelry during a time of financial crisis for France.

Born Archduchess of Austria, daughter to Empress Maria Theresa and Emperor Francis I of the Holy Roman Empire, Marie was married to Louis-Auguste, later Louis XVI, at just fourteen years old. In 1774, her husband became King, and she became Queen of France.

Marie Antoinette with a Rose by Vigée Le Brun, 1783, via the NYT.

Marie Antoinette was immediately unpopular. As well as her heavy spending, Marie was surrounded by scandal, accused of affairs, and of sympathizing with other countries, such as her childhood home of Austria. There were rumors that she decorated a chateau on the grounds of Versailles with gold and diamond-studded walls. Her hair poufs and magnificent court dresses were custom designed. She only officially consummated her marriage to Louis XVI in 1777, and her lack of children and heirs up until that point was strongly disapproved of. She was always, however, known for her style and taste. She was an early fashion icon, even if her status as such landed her in hot water.

After being placed on house arrest in Tulieres during the Revolution, and planning a failed escape from France, Marie Antoinette and Louis XVI were executed by the guillotine in January of 1793 in the Place de la Révolution. Before her death, Marie's hair was shaved off, her hands were bound, and she was paraded through Paris to the scaffold.

However, the night before her arrest, she took great care to wrap up her jewelry in cotton and place them into a wooden box. This box was sent to Vienna where it was placed with a friend of the Queen. Marie's daughter, Marie-Thérèse, survived the revolution, and when released in 1795, journeyed back to Vienna to reclaim her mother's jewels. Since then, they have been passed down her line of descendants.

At an important 2018 auction at Sotheby's, the Bourbon-Parma family put several of Marie Antoinette's personal jewels up for sale. The Bourbon-Parma family descends from a number of important ruling families in Europe, including the Habsburgs. The family is said to have produced Kings and Queens of France as well as Emperors of Austria. So this is some of Marie Antoinette's preciously guarded jewels have ended up; the Queen might never have escaped the revolution, but some of her prized possessions remain intact.

Bourbon-Parma family pieces up for auction at Sotheby's. 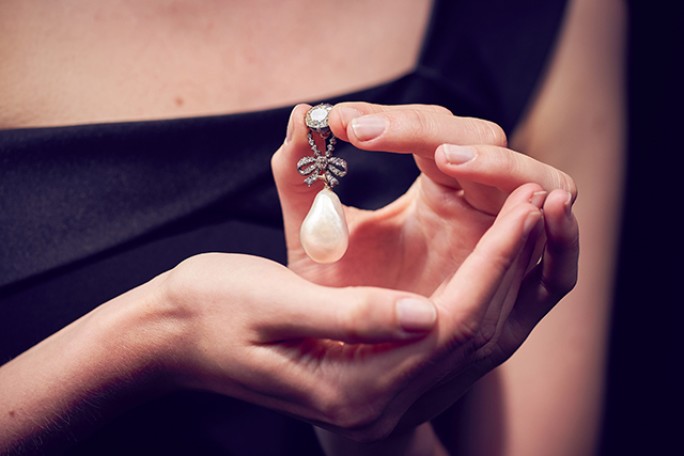 A natural pearl and diamond pendant that belonged to Marie Antoinette, 18th century. This pendant used to hang from the three-strand pearl necklace below. This beautiful piece sold well above estimate, for £27,881,497. Photos and info via Sotheby's.

Natural pearl and diamond necklace consisting of three rows of slightly graduated pearls. The star motif clasp is set with rose-cut diamonds. It was sold for £1,756,610. Via Sotheby's.

Late 18th-century brooch belonging to Marie Antoinette featuring cushion and circular-cut diamonds, with a detachable pear-shaped yellow diamond that may have been added later. Via Sotheby's.

Late 19th-century brooch belonging to Archduchess Marie Anne of Austria. The stones used once belonged to Marie Antoinette. Via Sotheby's.

Diamond and woven hair ring, late 18th century. The ring reads MA for Marie Antoinette and contains a lock of her hair. Via Sotheby's.

Diamond ring with a miniature depicting Marie Antoinette, late 18th century. The ring came from Marie herself and was bequeathed to her daughter after her death. Via Sotheby's.

The natural pearl clasp on this necklace belonged to Marie Antoinette and is detachable. It once connected to a six-string pearl bracelet in the 18th century. Via Sotheby's.

This cushion-cut diamond parure was made using five diamonds from Marie Antoinette's collection that had been passed down to her daughter. Via Sotheby's.

"I think she probably was one of the original, you know, the original 'it girl'. Honestly, in terms of her style and her relationship to fashion and jewelry."

The Affair of the Diamond Necklace

In 1772, Louis XV of France decided to make his mistress Madame du Barry a necklace at costing roughly $15 million in today’s terms. His jewelers began to assemble the necklace but it took a long time considering the number of diamonds needed; in the meantime, Louis XV died of smallpox. The jewelers were then left with a hugely extravagant 17 diamond necklace. They hoped to sell it to Marie Antoinette, thinking she would be one of the only people wealthy enough to purchase it, however, she did not.

Later, a con artist named Jeanne de Valois-Saint-Rémy, also known as Jeanne de la Motte, came up with a plan to steal the necklace. Her scheme involved forgeries and lookalikes of the Queen. Once sold, the necklace was dissembled and sold in pieces on the black markets of Paris. The Queen was accused of having been involved in the scheme to steal from the crown jewelers, and despite being acquitted of the crime, many of her subjects still believed her to be guilty. As such, her reputation became even more tied with diamonds and even more associated with scandal.

A reconstruction of the necklace in question made in zircon instead of diamonds.

This diamond, pearl, and ruby zig-zag necklace is made up of pearls that belonged to Marie Antoinette. The pearls were given to Marie Antoinette by the British Lady Sutherland, who also sent the Queen clothes and linen after she was imprisoned. The Queen gave a bag of pearls back to Lady Sutherland for safekeeping when the situation became dangerous for her. After her failed escape and death, the pearls were fashioned into this necklace. 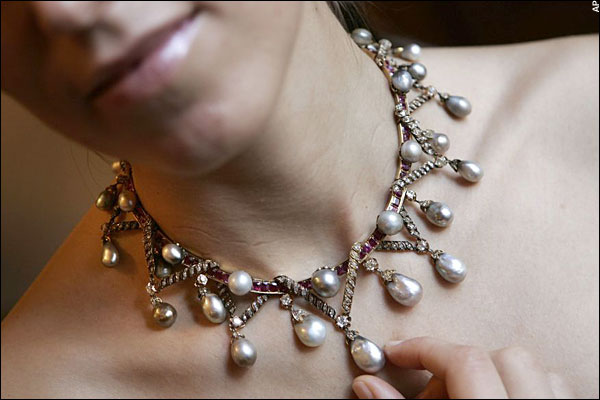 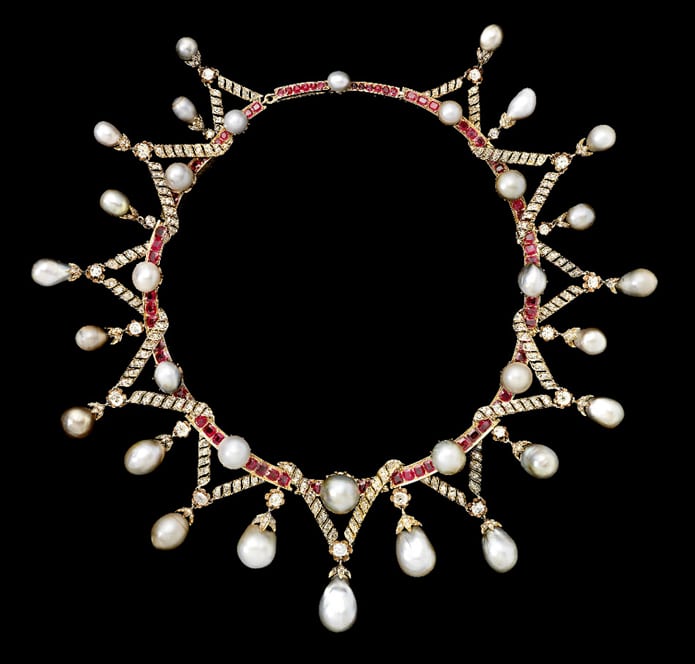 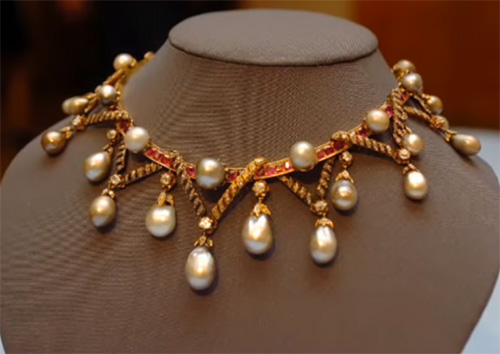 There are a number of jewels out there now that have claims to provenance from Marie Antoinette. However, there is also an even greater number celebrating and remembering her as a character, as a queen, and of course, as a fashion icon. Marie Antoinette's legacy lives on not just in the jewels she owned, but the jewels she inspired.

A pendant locket with a lock of hair, set under glass or rock-crystal with an inscribed card and mounted in a gold filigree setting, late 18th century.

The lock of hair could be Marie Antoinette's, and certainly claims to be; the inscription of the back on the locket reads "a lock of hair of Marie Antoinette, Queen of France, given by her to Lady Abercorn by whom it was given to her sister Lady Julia Lockwood, whose daughter Lady Napier gave it to W.S. 1853."

Photo via The British Museum.

Gold and diamond bracelet clasps with blue glass. These kinds of clasps were worn one on each wrist with bracelets. These two are connected to Marie Antoinette, but the inscription reads MC instead of MA. c. 1770. Via the V&A.

19th-century gold and enamel parure with portraits of famous french royalty. Marie Antoinette is depicted on the earrings twice and on the central pendant portrait. Via The British Museum.

A jasperware portrait medallion of Marie Antoinette, 1780-1790, England. Via The British Museum.

Another ring from ten years later in 1793: Marie Antoinette, in quite a different mood. En Grisaille miniature on ivory, set in gold. A sketch was made of her during her trial, The Conciergerie (2nd August 1793 - 16th October 1793) when she was very weak and ill, and the sketch used for this ring. This image would have been of Marie during her last days when it is said that her hair turned white from distress. Courtesy of Fabian de Montjoye.

Her Story in Jewels: Queen Victoria

Her Story in Jewels: Queen Charlotte