When someone mentions the cherub, usually a distinctive image will spring to mind: a charming, chubby child with wings. Sometimes wearing a loincloth, sometimes naked, and often carrying a signature bow and arrow. So where does this image come from, and what does it mean if you wear one of these little guys on a piece of antique jewelry?

The general image we have of the 'cherub' in our minds is actually a fusion of three different origin symbols: the Judeo-Christian cherub, the Greco-Roman Cupid or Eros, and the Italian putti from historical paintings.

The first kind of cherub is the Judeo-Christian angel figure. They can be found in Genesis, guarding the entrance to Eden, and elsewhere throughout the Hebrew Bible, performing God's will on earth. The name comes from the Hebrew kerub, meaning one who blesses, and their symbolism is highly spiritual.

Not your average angel: a tetramorphic (four-sided) cherub, similar to one described in Ezekiel 1:5. Image from a 12th-century wall mosaic in the Basilica Cathedral of Santa Maria Nuova of Monreale, in Monreale, Sicily, Italy.

A 19th Century French ring featuring Cupid with his bow and arrow.

A painted interpretation of Cupid.

Oil on canvas. Photo Via The National Gallery.

Three playful putti set in one of AAJ's favorite pendants.

Despite there being cherub and Cupid jewelry dotted throughout history, it really boomed in the Georgian and Victorian eras. During these times, jewelry was often sentimental and full of coded imagery, so cherubs were a good symbol to use as shorthand for anything to do with love. Spiritual cherubs, Cupids and putti often fused into one recognizable cherub figure, and were frequently painted onto enamel, illustrated behind glass in pendants, or carved in micro-ivories.

This intricate boxwood ring bordered by diamonds shows a carving of a cherub playing with a dog. Dogs are a symbol of fidelity, so this beautiful tableau denotes faithful, loyal love. 1775-1781, France. Photo Via The British Museum.

With love being such a broad symbolic area, cherubs are often shown alongside other symbols to denote specific kinds of love. For example, cherubs depicted with flaming hearts imply passionate love, whereas cherubs in cages indicate being trapped by love.

Cherub heads surrounded by wings symbolize incorporeality, literally, as they have no body. The angelic head then reaches a higher spiritual and intellectual significance.

This Victorian cherub brooch has a locket back, teardrop pearl, finely enameled face, and a pearl set of wings that span approx 50mm.

Another cherub head, this time in silver with garnets on a Victorian bracelet.

Two cherubs, one writing in the other's book with his arrow. The writing is open to interpretation; it could be that the cherubs are plotting who to dart next with their arrows of desire - or that they're writing a love letter.

Paint on porcelain, set onto a bonbon box, and made into a pendant.

This rare micro ivory ring circa 1800 was by Francesco Tanadei. It shows Eros wearily leaning on a pickaxe, with a basket of flowers on his back, preparing the hard soil, to sow the seeds of love. The oval face is set into a finely milled gold bezel. Francesco Tanadei was the wood and ivory carver to the Italian King Victor Emmanual I, hence the exquisite craft and artistry here.

A cherub kneeling toward the sun with the inscription ‘j'adore ce qui me brule’ - 'I love what burns me'. An elaborate Georgian 15 carat gold seal, with foiled rock crystal intaglio.

A Georgian micro ivory pendant/brooch. The cherub here is holding a flaming heart, for passionate love, and stands on corbels for stability and strength. The writing reads 'l'amour' - 'love' in French.

This ring depicts the allegory of Cupid and Psyche from the Metamorphoses, with a cherub chasing a butterfly. Cupid and Psyche symbolize the different parts of love, body (sexual attraction) and soul (spiritual love). Together, they unite in marriage. Victorian enamel on 18-carat setting circa 1910.

This Georgian era micro-ivory ring shows a cherub kneeling at an obelisk with a flaming heart ‘à vous dédié’ - dedicated to you. The flaming heart here symbolizes passionate love - but it meets with the sturdy image of the obelisk. They are set on 18 carat gold with a cannetille surround and band.

Victorian hoop earrings, featuring gold entwined with seed pearls and to the center of each hoop, a golden playful putto dancing, holding pearls.

A 15-carat gold shell cameo pendant (previously a brooch) circa 1820. The cameo shows Eros in a chariot being pulled by dogs - hunting for love, perhaps.

These tiny gold cherubs appear with a skull, symbolizing mortality. This could be an echo of the sentiment 'til death do us apart' in symbolic ring form.

Caged cherubs, trapped by love on a ring.

A gold ring with cherub heads.

A cherub connected to a thread making an eternity knot - this love connection is forever.

In all its forms, the cherub is a highly sentimental image. Sweet, angelic, and often mischievous, with a long-standing association with love, it is little wonder that these jewels were so popular during the Georgian and Victorian eras when allegorical and sentimental jewelry was at its height. 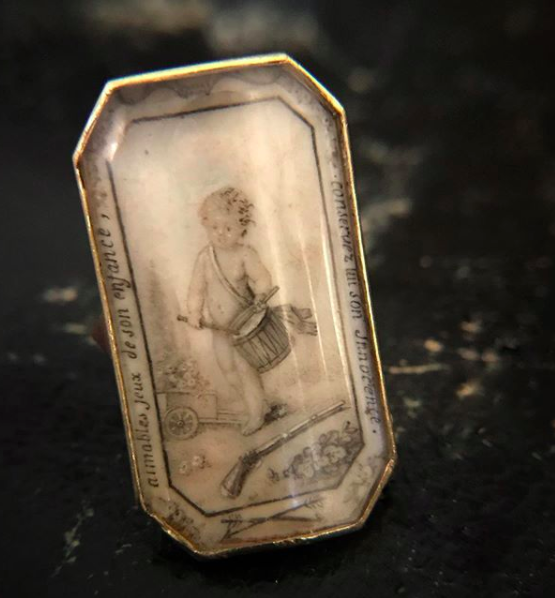 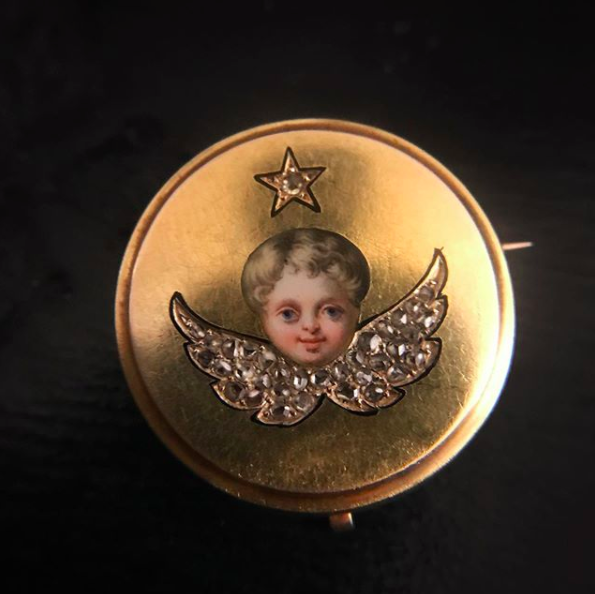 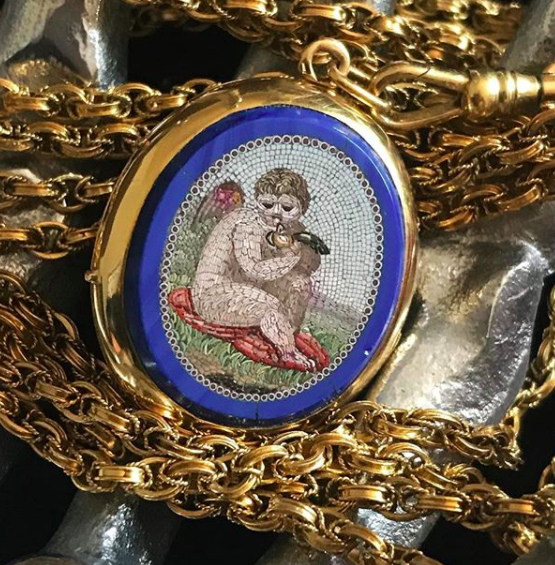 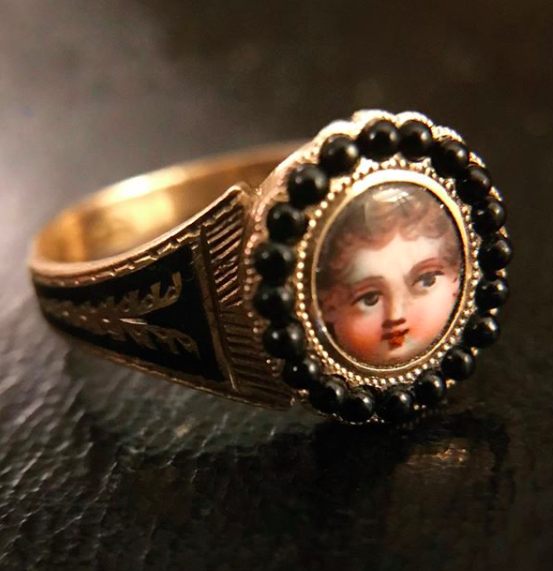 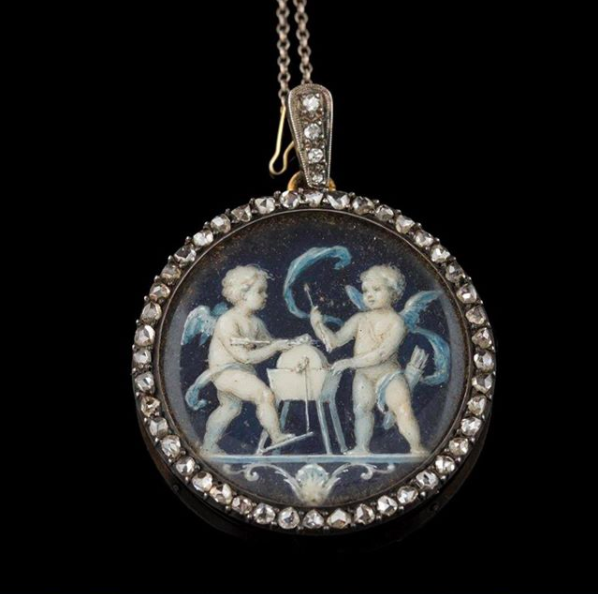 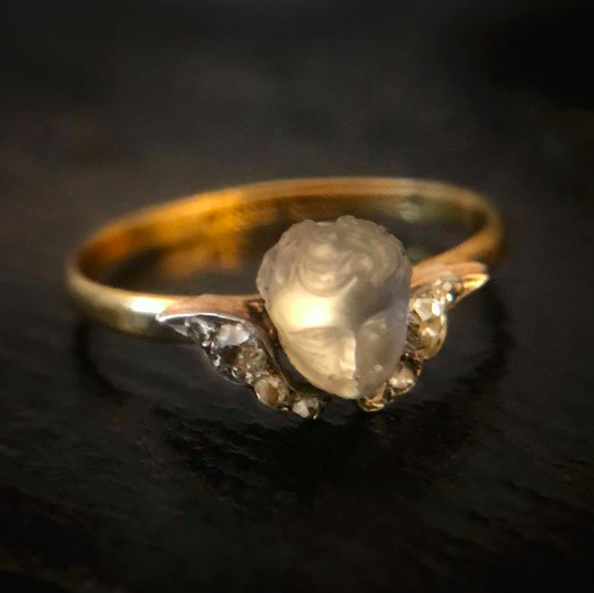 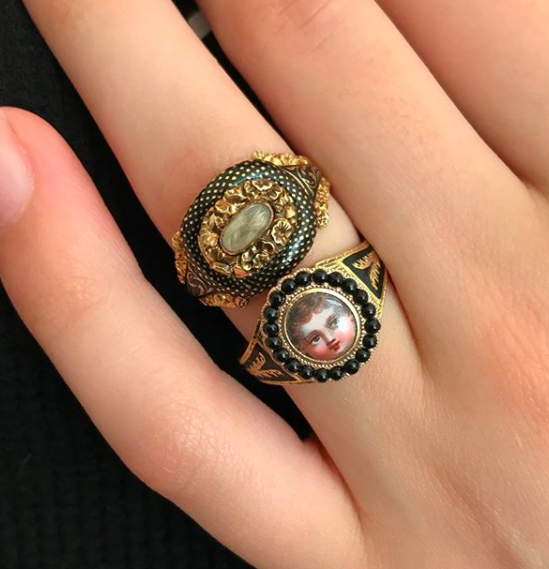 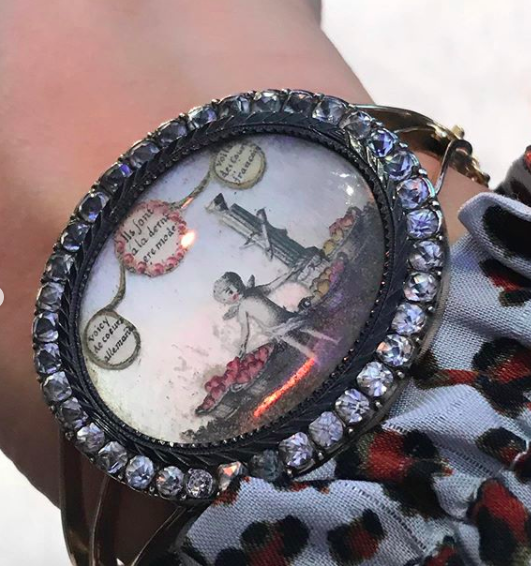 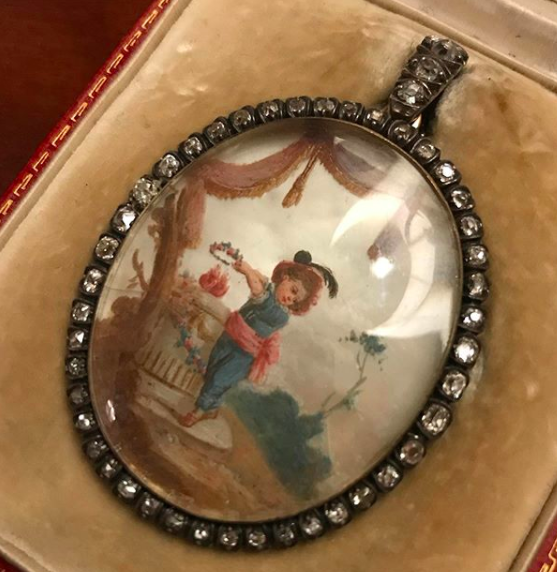 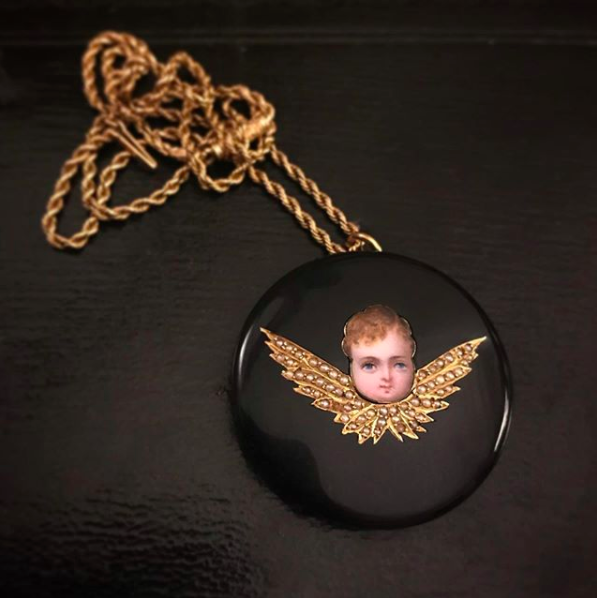 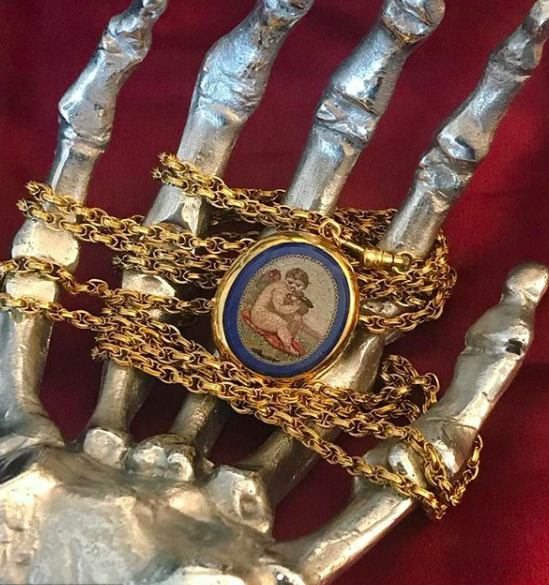 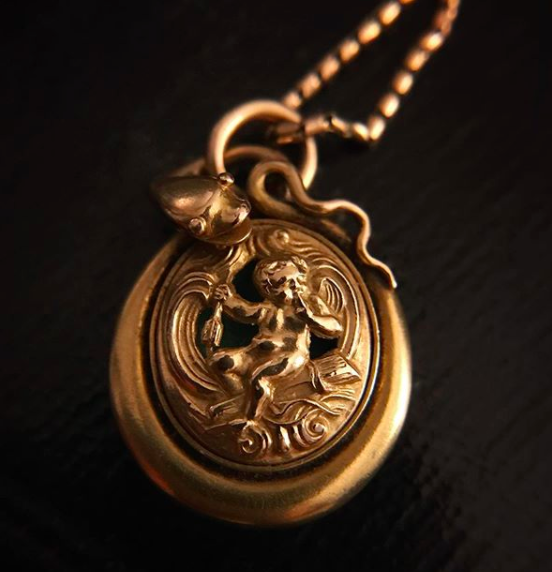 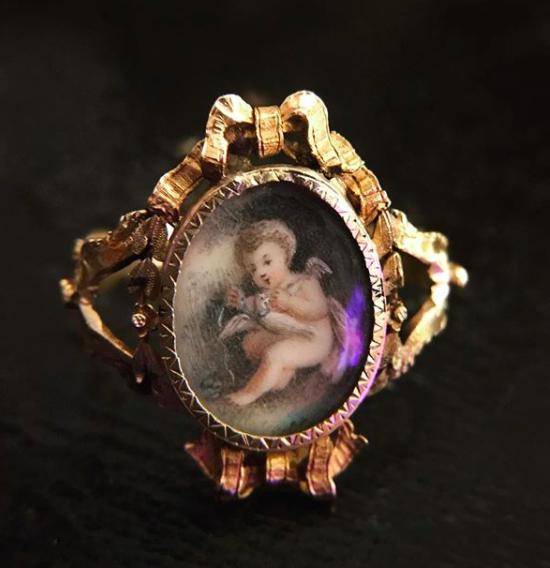 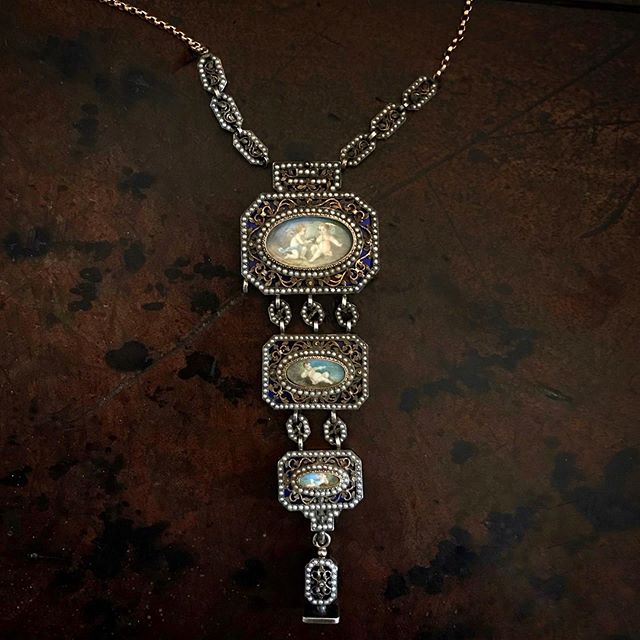 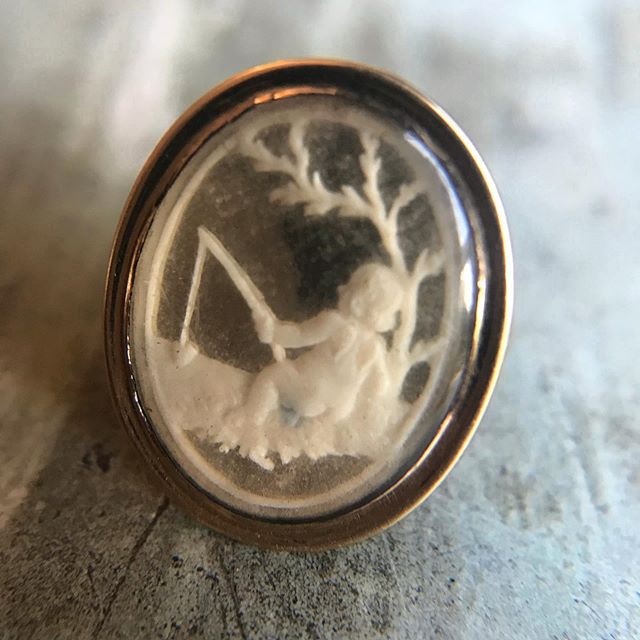 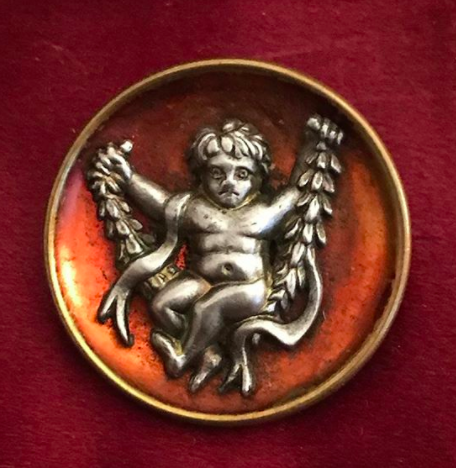 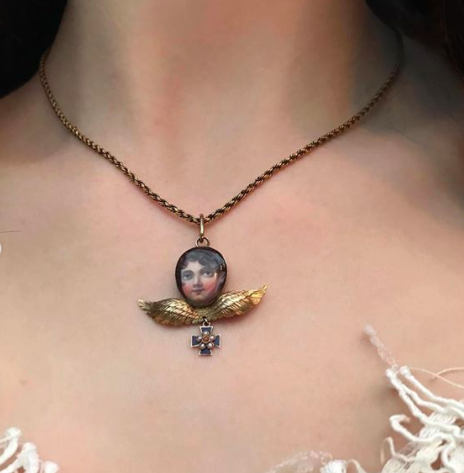 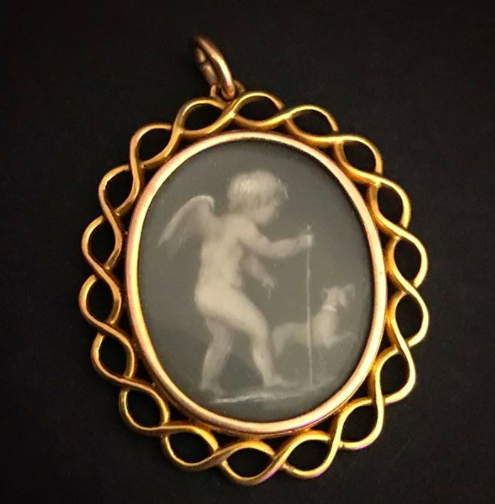 A Language of Connection: Hand Symbolism in Jewelry