Photo via Jewels and Jewellery by Clare Phillips.

Birthstones are stones associated with a person's month of birth. From as early as the 1st century, various precious gemstones have been associated with certain months of the year. Around AD 100, the Jewish philosopher Josephus noticed that the 12 stones of Aaron's breastplate in Exodus could perhaps correspond not only with the 12 tribes of Israel but with the signs of the zodiac and the months of the year.

Soon afterward, Christians went on to interpret the 12 months/ stones/ zodiac signs as corresponding to the 12 apostles of Jesus. Despite this ancient history, birthstones only began to be worn as jewelry around the 15th century. Since then, the gems associated with each month have slightly shifted and were 'set in stone' by the American National Association of Jewelers in 1912 in order to create a definitive list of birthstones. For this reason, some months may have more than one associated birthstone.

Nowadays, birthstones are mostly removed from religion and spirituality but can provide a personalized element to jewelry, symbolizing different qualities, values, and emotions from jewel to jewel.

Read on to find out your birthstone, and its history and meaning, complete with examples of antique treasures.

The garnet has been the assigned birthstone of January all the way back from the 15th century. The name 'garnet' is thought to come from the Latin 'granatum' meaning pomegranate, as the bright reddish-pink fruit of the pomegranate looks similar to many garnets. Garnets represent protection, constancy, friendship, love, and vitality since they have been long associated with the heart and blood because of their coloring. Click on each photo below to see them up close!

Middle: garnets set in gold in the shape of a maltese cross on a brooch, c. 1800.

All photos © Victoria and Albert Museum.

Although February was once also associated with hyacinth and pearl, it has always had a strong association with amethyst. This connection was solidified in 1912 with the US's standardization of birthstones. Amethyst is thought to be calming and is associated with peace, temperance, sincerity, and balance. Many still believe in the stone's powers to soothe turbulent emotions.

All photos © Victoria and Albert Museum.

March's birthstone has traditionally been bloodstone (AKA heliotrope) since around the 15th century. However, this fairly unpopular stone was changed to aquamarine in the early 20th century. Now, March-born people can choose which stone they prefer. Both stones are associated with health and preservation of life. Whilst aquamarine is the more popular option nowadays for its beauty, bloodstone has long been thought to have lucky, metaphysical properties, representing truth. Some interpret the red pattern of the bloodstone as representing the blood of Christ.

Left: finger ring in oxidised silver with nude figures on each shoulder, set with an unengraved bloodstone, c. 1858-1890. Photo: © The Trustees of the British Museum.

Right: gold ring designed for Henry Walters. The bezel is shaped like a ship, alluding to Walters' steam yacht. The aquamarine intaglio shows a bell and a compass. The shoulders have fish and mermaids holding anchors. By Tiffany, New York, 1893. Photo and info via Rings: Jewelry of Power, Love and Loyalty by Diana Scarisbrick.

Whilst in some places and points in history, April has been linked with sapphire, and nowadays can also be associated with rock crystal, diamond is April's most well-known and primary birthstone. Diamonds, due to their unique hardness, often symbolize eternity in many forms; eternal love, eternal unbreakable strength, or purity and innocence. To find out more about diamonds specifically, visit AAJ's recent Diamond Gemstone Guide.

All photos: © Victoria and Albert Museum.

May is the month of the emerald. Emeralds symbolize truth, love, and happiness. The ancient Egyptians believed emeralds to be a source of eternal life, whereas, in ancient Greece and Rome, the stone was associated with Venus, the goddess of love and hope. In terms of love symbolization, whilst bright red ruby is linked with passionate love, the vitality and freshness of emerald's green are more in line with a natural, faithful relationship.

Right: emerald parure set in gold and silver, c. 1806. Believed to have been given by Napolean Bonaparte and his consort Joséphine to their adopted daughter, Stéphanie de Beauharnais on her marriage to the Grand Duke of Baden.

All photos: © Victoria and Albert Museum.

Pearl is the primary birthstone for June and is unique in that it originates from water. Pearls grow in both saltwater and freshwater mollusks. Pearls have been associated with purity, humility, and health for hundreds of years. Their shiny, creamy colors are also associated with innocence. Moonstones are likewise 'cloudy' in appearance, with a seeming inner luminescence that is associated with fertility, love, and of course, the moon. 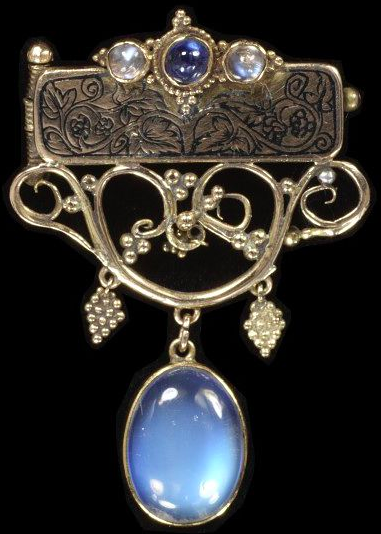 Middle: a gold ring with brilliant-cut rings and half pearls and emerald shoulders, 1810-1820. Photo: © Victoria and Albert Museum.

Rubies are an extremely romantic, passionate stone, with strong associations with love. The name derives from the Latin 'ruber,' meaning red. In ancient India, it was thought of as the king of the gemstones. The stone was thought to bring luck to battle by Burmese warriors, have healing and anti-inflammatory qualities, and symbolize successful and passionate love throughout history for Medieval Europeans.

Peridot is the yellow-green stone deriving from olivine. Sometimes confused with topaz or emerald, peridot is associated with protection from evil. Sardonyx, on the other hand, is a combination of sard and onyx, with a resulting red color intersected by black or white stripes of onyx. Sardonyx has been used for seals, cameos, and carvings for hundreds of years and represents spiritual strength, courage, felicity, and stability. Spinel, meanwhile, has often been confused with rubies. Spinel comes in a range of colors but is most often red, and denotes harmony and health.

Middle: gold brooch with sardonyx cameo of the head of Bacchante, late 18th century. Photo: © The Trustees of the British Museum.

The word sapphire derives from the Greek 'sapheiros' meaning blue. It is also associated with the planet Saturn, and in many languages, the word for sapphire is derived from the name for Saturn. Across history, sapphire has been admired for its rich blue hue and thought to be a link to the heavens as it seems to reflect blue skies. Sapphires were worn in the 12th century as religious stones that could give protection from witchcraft. To this day, it is associated with protection, wisdom, the heavens, peace, chastity, and good health.

Opals are usually white in color but can have kaleidoscopic reflective color streaks in them ranging from blue and yellow to green. The ancient Greeks believed that opal could give them the gift of prophecy and protection from illness. Opal is also associated with purity and hope. Opals contain about 10% water but are mostly found in dry desert areas. As such, they are also interpreted as watery stones, with their shimmer also evoking teardrops, rain, or oases.

Topaz comes in clear, blue, yellow, and orange varieties, although one of the more prized colors is the rosy-orange hue that was found in the Minas Gerais mines in Brazil in the 18th century. Topaz symbolizes affection and fidelity as well as healing and creative energy. Citrine is also a birthstone for November and symbolizes wealth, prosperity, financial success, and confidence.

Middle: pink-hued topaz from the mines of Minas Gerais in Brazil, c. 1735. Photo and info via Georgian Jewellery by Ginny Redington Dawes and Olivia Collings.

Turquoise is one of the oldest stones that humans have mined, collected, and made into jewelry. Its bright, blue-green hue has made it an attractive choice for jewelry across history. The stone gets its name from the french 'pierre turquoise' meaning Turkish stone because the Asian trade routes that brought turquoise to Europe moved through Turkey. Turquoise has long been thought to have healing power, and also represents success, energy, wisdom, and serenity.